Hello and welcome. My name is Sammy L. Pittman, DVM and I am a veterinarian, farrier, and horsemen with a great interest in the field of equine podiatry. My wife and I own and operate Innovative Equine Podiatry and Veterinary Services in Collinsville TX. I offer a full line of horse veterinary care, however my passion lies within the health and well being of the hoof to better serve your equine companion. With so much lameness attributed to the lower limb many horses require an out of the box approach to achieve the success desired.
Give us a call and we will be glad to help you in any way we can. Thanks so much.
I will be discussing different Cases and thoughts from our world with the horse. Feel free to contact us via text or call at 918.235.1529 or send an email to iepvs11@gmail.com. Thank you for reading and enjoy 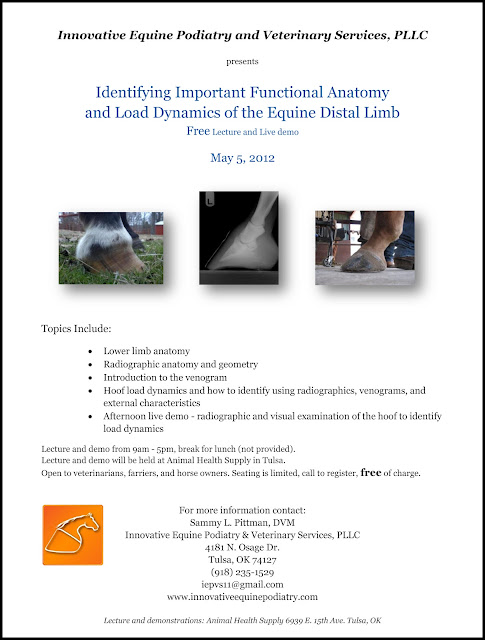 Come Join us for a great day of discussion!  9-5pm at Animal health supply (6939 E. 15th Tulsa, Ok).  Lunch on your own.  Free to horse owners, trainers, farriers, and veterinarians.  Morning anatomy dissections and afternoon live demo.
Please call 918.235.1529 or email iepvs11@gmail.com to register as seating will be limited.
Posted by Sammy L. Pittman, DVM at 4:04 PM No comments:

Hello out there in the horse world.  We are off to a busy start with many new podiatry cases, vaccinations, floats and yearly wellness exams.


I wanted to post a couple of recent cases that drive home two very important points regarding therapeutic shoeing.  Both cases are in rocker shoes.  One because of crushed heels and poor foot mass and the second due to a low grade navicular bone lesion.  Both cases where started in rocker shoes and have been sound.  However after another farriers reset without radiographic guidance as per request of the Owner to help reduce cost both horses went lame.  I ruled out any likelihood of close nails and horses are exhibiting only low grade lameness.
After radiographs where performed and measurements taken the shoe and trim were slightly modified.  Below are the differences in pre and post shoe measurements that seemed significant to me and could likely be the reason that both cases where not as sound as previously.


Take some time and compare and contrast each radiograph for each case.

Note the major differences in digital alignment, palmar angle, toe lever, tendon surface angle and suspensory ligament of navicular bone distance.  The changes noted radiographically help explain why this horse would be lame.  The mechanics governed by the trim, shape and placement of the rocker alter loads inside the foot.  With the PA  much lower a higher degree of tension can be expected within the deep digital flexor unit and more hyperextension applied to the coffin and pastern joint.  A recent paper suggest that for every degree change in PA, pressure on the navicular bone changes 4%.  We changed load on the navicular apparatus by around 24 %.  Note the distance measured from the navicular bone to the origin of the suspensory ligament of the navicular bone.  This changed 6mm and may also be another reason for increased comfort with higher mechanics.  The last important aspect is the toe lever, measured from COA to where the shoe would leave the ground.  This is the affective lever arm that gives the ground advantage to apply force to the flexor tendon apparatus.  This number was greatly changed and subsequent reduction in force applied to DDFT is achieved.


This horse has mild navicular bone changes and has responded very nicely to the rocker shoe approach.  The increased PA and reduced digital break over has this horse back in the show ring.  This one has baffled me as after the farrier reset horse was just slightly off in soft footing and traveled almost normal on hard surface.  On initial exam the PA and shoe placement appeared to be in good shape.  However when in soft footing the horse would tend towards a rocking back approach, which I assumed to increase pressure on DDFT and navicular apparatus.

The measurable differences are a shortened toe lever and a much lower PA, however the Suspensory ligament distance and the TSA remained very similar despite the lower PA.  This is very confusing and I will continue to try to wrap my head around this one.  I think the key here was reshaping the rocker to place directly under center of articulation versus slightly behind and modification of the trim in the same manner.   I feel with the belly/rocker to far back this forced a higher than needed PA and created a scenerio that allowed for rapid sinking of the heel in soft footing.  Jogged sound in hard and soft footing after changes where made.

1) Not all rocker shoes are the same.
2) Radiographs are a valuable tool in many difficult cases.
I feel that if radiographs where available, for the farriers that reset these shoes, this could have been avoided as there are obvious mechanical differences noted in the radiographs.  Many times have I pulled a shoe and modified it after seeing the radiograph and I am thankful for that advantage.
Do not blame the anything but the mechanics!  Do you really know what they are?

Note to Owners:  Yes radiographs can be the difference between your horse being sound or lame.

Note to farriers and veterinarians: Do not blame the  rocker shoe, heartbar, egg bar, or whatever device applied without critical evaluation of the mechanics  that the foot is subjected to.  If something did not work try to figure out why. Through serial radiographic evaluation of every foot problem one can develop an enormous amount of information and detail that can allow such great success.

Sammy L. Pittman, DVM
Collinsville, Texas, United States
Both a veterinarian and farrier, I have a special interest in lameness and foot diseases such as laminitis/founder, navicular syndrome, heel pain, thin soles, crushed heels, hoof punctures and trauma. We strive to offer a personable relationship with you and your horse.

Promote Your Page Too